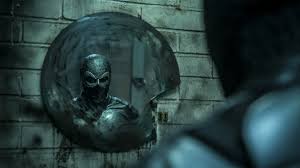 Whatever it is they’re putting in the in Finland, it’s working.  When just about every variable in superhero mythology has been explored, the Fin’s go and find a way to reinvent the idea of the masked crusader.  The thing is though, the central idea, plot and themes that director Jesse Haaja’s film is built around are nothing new; they’re all fan tropes and stereotypes. The broken man seeking vengeance after his family are murdered by a criminal gang following his discovery of a well-hidden “corporate” secret is just a variation on the origins of Batman, the Punisher and a multitude of avenging angels and the inclusion of an investigative journalist hot on the heels of both “hero” and villains alike is a time honoured and well-worn and used sub-plot.  It may be a basic origin story that’s steeped in costumed cliché, but it’s become a fan because it works so well,  as it introduces the hero to the audience and provides reason and motivation for his actions that allow said audience to identify the “” and the “baddies” and choose an appropriate side to put their weight behind and root for. Even, as is the case in Rendel, when the hero of the hour is a homicidal lunatic who likes to do things the old fashioned way and get his hands well and truly dirty.

It’s the gritty, back to basics, thuggery that infests every aspect of the film that separates Rendel from the rest of the superhero pack. no gadgets, no fancy armaments, no high concept costumes no-one to back him up bar the avatar of jurisprudence that accompanies him, Rendel is just a man driven by his will to hurt the men who hurt him as much as possible. Dressed in black and with a mask made from the source of the secret that killed his family, Rendel is more akin to the pulp anti-heroes of the thirties than the modern mainstream idea of the caped crusader. More Shadow than Batman and more the Spider, minus his , than the Punisher, Rendel embodies the same rage and drive as Darkman, but because he doesn’t share the same shattered psyche is more driven and focussed, slowly working his way through his enemies in a bruising, brutal, bone breaking series of encounters around, and in between, which Haaja’s tale, and Rendel’s backstory, gradually unfolds. Sharing a similar undercurrent of black as night humour as the aforementioned Darkman, Rendel (which apparently means ‘Order’ in Hungarian) twists the usual standard, superhero fair into a myriad of roughly gouged shapes and pushes and stuffs them into an eighties style, revenge thriller plot that ensures, thanks to it liberally borrowing and transforming a plethora of four standards, that it’s a monstrously enjoyable beast. Here is justice, here is punishment, here is Rendel…Tim Cundle