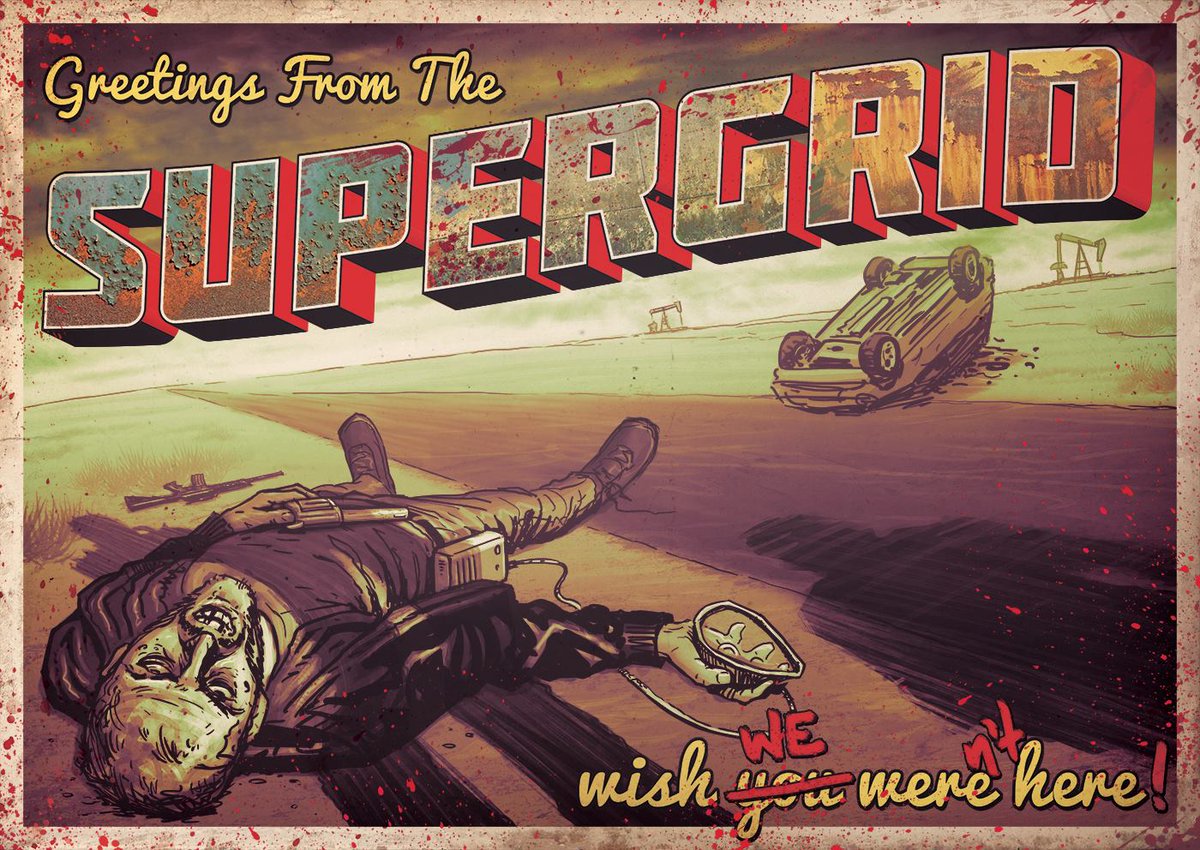 Post-apocalyptic film SuperGrid shooting in and around Regina

Some of them are already stationed in the weedy ditches, where vans and tents house props, sunscreen, granola bars and coffee.

Amid blue sky and Qu’Appelle Valley greenery, a wood-and-styrofoam graffitied wall forms a border crossing on the road, a tiny highway southwest of Southey and southeast of Earl Grey.

toward the wall is the lovingly dubbed “shit box,” a rusted and welded truck. Leo Fafard trails a blue-smoke grenade from the driver’s side window.

This happens several more times, first with a camera mounted on the hood, then with and without actor Jay Reso in the shot.

To the headset-wearing people that linger too near the roadway, Fafard jokingly yells: “Get the f— out of the way, because if I kill someone, I’m going to kill you!”

This is the set of SuperGrid, an action film that began shooting in Regina on Sunday.

Many of its crew were part of WolfCop — including producer Hugh Patterson, director Lowell Dean, makeup artist Emersen Ziffle, actors Fafard and Amy Matysio, and first assistant director Bohn. His Liquor Donuts T-shirt is a remnant of that project.

The set is reminiscent of the Mad Max movie, which is not coincidental. The story is inspired by the cult classic film but has a hyper-local twist.

“It’s basically the imagined worst possible case scenario for a future of provinces like Saskatchewan or states like North Dakota 40 years down the road,” says Dean, as they’re “sold off to countries like Russia for fracking and things like that.”

The cities are run down and waterless, and the highways are the domain of “jackals,” futuristic pirates.

“The story was inspired by movies like the original Mad Max, very desolate, flat — not saying that Saskatchewan’s desolate,” says writer Todd McCauley on Thursday, Day 5 of shooting.

“Originally I had tapped it as the family road trip from Hell,” as two brothers smuggle mysterious cargo across the border and run into the pirates.

The SuperGrid team will work for 18 days in and around Regina, at locations including a scrap yard, Grand Coulee, Lumsden Beach, Lebret and the former Sears Warehouse.

Like WolfCop and its sequel, SuperGrid is an entirely made-in-Saskatchewan job, even though it might make sense to shoot elsewhere.

“We wanted to continue to make films here. It’s not an easy task, but it’s where I set the film, where I set the story,” says McCauley, who wrote the script with help from Justin Ludwig.

“To have all of our friends come back, either from other provinces and even the ones that are still here, to come back and band together to make this, it’s huge.”

“It was tough to get all the bodies that we needed and keep it a Regina local production,” adds SuperGrid co-producer Trinni Franke, who lives in Toronto.

“Because Hugh is a great producer … and Lowell, people came back off big shoots to shoot this here locally in their hometown. But typically they would be away shooting all year in Winnipeg or Toronto or B.C.”

This is Dean’s first film since the WolfCop sequel, which shot in February last year.

“I’m shocked that I’m back here doing another movie, but it’s kind of great,” says Dean, who has spent the past few months working in Toronto and plans to head to Vancouver once SuperGrid wraps.

“It’s not exactly the hub of right now and so to get to do a movie here and with this crew, I didn’t think it would happen again, especially not so soon.”

Battling the sunshine has been a challenge, but given his last two features were filmed in the winter, Dean welcomes the change.

The cast and crew are staying hydrated and applying — and reapplying — lots of .

“Makeup wise, it is a huge challenge, especially with as much sun as we’re getting,” says Ziffle, whose goal is consistency throughout the shoot, not having people “turn red halfway through the movie.”

“With all the dust and the wind, hair is also an issue,” adds Ziffle, who is doing double duty as production designer. “But it loans itself to this style of movie.”

SuperGrid’s budget is small — especially as far as action films go. At $1.2-million and a cast and crew of about 50 people, plus extras, “We’re very stretched,” says Franke.

“Especially given that it’s an action film with cars and explosions and chases and shoot-outs, you would not normally attempt to do any of this on a budget of that size.”

SuperGrid’s post-production should be completed by early 2018, for a festival circuit and release in Cineplex theatres.