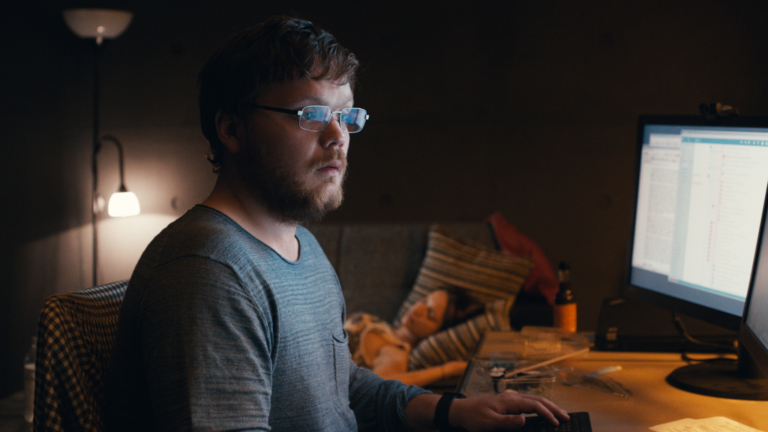 Piet Carnell (Adam Ild Rohweder) is the promising young man of the title. A ‘brilliant’ student of computer science at Bauer University, he has co-written a paper entitled ‘Invisible Traces’ with a colleague Klara Koslowski (Pauline Galazka). Klara too has become invisible, disappearing for a while, and then reappearing dead, her body in a horrific state. We know all this from the outset, because A Young Man With High Potential begins with Piet being intercepted by a detective (Amanda Plummer) hired by Klara’s family, and asked to retrace his story. The rest of the film, save for the very end, is an extended flashback in which we find out more about and his evolving relationship with Klara – even if he keeps most of these details to himself.

Piet is both a nerd, and an antisocial, agoraphobic recluse, holing up in his university rooms, eating meals delivered to his door by a courier (Sheraz Khan), and interacting with others almost entirely at a distance through his computer. His only actual friend is neighbor Alex (Pit Bukowski). Then pretty, confident Klara forces herself into Piet’s life, insisting he let her pair up with him on his paper. Klara’s intentions are cynical – she just wants to ‘get the best CV possible’ – but Piet is reasonably happy to go along with this, not quite able to believe that he is suddenly hanging out with the woman of his dreams (and of his sexual fantasies). Piet is strange, but he is also, as Klara says, ‘a great guy, and really smart’, with a very strong sense of right and wrong that he even brings, somewhat gratuitously, into his work on . Soon Klara develops a real friendship for Piet. Even the live-cam girl Kylie (Laurence Roothooft), who provides Piet with paid online masturbatory scenarios, seems to like and care about him.

“I want to make the world a better place,” Piet tells Klara, “Like a modern-day Robin Hood.” Laughing, Klara replies, “A Robin Hood who never leaves Sherwood Forest.” The dark misadventures which follow will see Piet transgressing his own spatial and ethical boundaries, and ending up in a real forest, left lost and forever changed by what he has done, even if trace of it remains. It is a confronting tale of moral descent, in which writer/director/editor Linus de Paoli (Dr. Ketel) shows his anthropic antihero doing terrible, despicable things, but still somehow keeps us uncomfortably on side with Piet and maintains our desire, however, conflicted, that Piet will get away with his actions.

This sympathy is possible in part because Piet is so pathetic and pitiable, trapped in his own insular mindset and getting into trouble only when he tries to emerge from his shell (which everyone, the viewer included, wants him to do) – and in part because we keep being reminded of his potential for kindness and good, especially in his dealings with immigrant cafeteria worker Nathalie (Vania Bajdarova). The result is a film that all at once follows the ‘invisible traces’ of an awful while remaining ambivalent about the manchild who has committed the outrage and meticulously covered his tracks. Like the pseudonym ‘Richard Kimble’ that he at one time employs, Piet will always be a fugitive, at least from himself. For, made to live with the knowledge of innocence – and love – lost on his long dark night to manhood, Piet enacts and then an errant rite of passage. De Paoli takes the alienating, clinical interiors of Piet’s narrow environment, and redecorates it in different, shocking that reveal the bloody mess of this sad geek’s inner life, as A Young Man With High Potential delivers its identity piecemeal in packaging that perfectly fits the disconnected age of the .