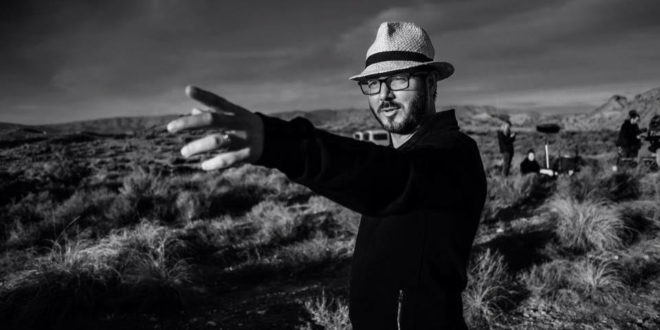 Interview with ‘It Came From the Desert’s’ Marko Mäkilaakso

Finland’s Marko Mäkilaakso is not new to the filmmaking community. His directorial debut, War of the Dead, debuted at the Toronto After Dark Film Festival. He also directed “Huomenna” music video, which won the Emma award 2005 for best Domestic Music Video, as well as the video for “ taa” by , which was nominated for Best Music Video at the Muuvi Awards that same year. Robin’s “Frontside Ollie,” also directed by Mäkilaakso, was nominated Best Music Video of the Year at the 2013 Emma Awards. His most recent film, the giant insect flick It Came From the Desert, will release this year in Finland. PopHorror got the chance to chat with the director and pick his brain about his favorite horror flicks, his start in filmmaking and where he’s going from here.

PopHorror: When did you first realize that you wanted to be a filmmaker?

Marko Mäkilaakso: Well, that happened at early age when I was 8 or 9. I saw Spielberg’s Raiders Of The Lost Ark on VHS and I was so blown away by every aspect of that movie. I thought to myself, “Who made this?” So I asked my father who made movies. He told me about movie directors and from that moment on, I knew what I wanted to do for the rest of my life. Make movies!

PopHorror: You’ve worked on movies – both shorts and features – music videos, commercials, and TV series. What is your favorite type of project? Why?

Marko Mäkilaakso: I love making feature films since that was the format that got me hooked from very early on. There’s nothing greater than making a movie! But I also like shooting music videos. It’s always very visual, creative, fun and completely different than making movies.

PopHorror: You’ve also worked in many aspects of filmmaking, both in front of and behind the camera. What’s your favorite job to do on set? Why?

Marko Mäkilaakso: Directing. When I wake up and go to the set, I’m in heaven. There’s nothing better filmmaking to me. Being there with your cast and crew, setting up a shot and directing a scene… Holy crap! It just can’t get better than that.

PopHorror: Tell me about your first feature length film, War of the Dead. What did it feel like to get behind the camera to create your first film?

Marko Mäkilaakso: It was the same feeling I still get. Just pure magic! Of course now, after four movies, I know much more than back then, but the feeling is the same. It’s like taking out the girl of your dreams when you were young. That kind of feeling, you know. Like falling in love. I think I always feel like falling in love again when I shoot a movie. It’s just so great! I’m so lucky getting to do this for .

War of the Dead was a very troubled production with delays, but it never destroyed my feeling about filmmaking. I never went to film school, so War Of The Dead was my film school. I learned so much from that experience and loved it so much! Being a film director is such a massive job. You need to be producer, director, writer, actor, manager, father, son, fan, lover, critic… everything! And you need to know when to be what and to whom. You need to deal with the business side and the creative side and make compromises. It’s a very lively profession, dealing with lots of different people. I’m a very private person in real life but on set, I go crazy… But in a good way! (laughs)

PopHorror: (laughs) You’re so enthusiastic! It’s so much fun chatting with you, Marko. You seem to gravitate towards making horror movies. Are you a horror movie fan?

Marko Mäkilaakso: I love horror movies, but then again, I love all kinds of movies… action, horror, comedy, drama, you name it. I don’t mind switching genres – it’s all fun! But it’s crazy fun to shoot action in the desert and imagining giant ants chasing you!

PopHorror: It sounds like you’re talking about It Came From the Desert, which is due out this year. Tell me about it. Where did the idea come from? What was filming like?

Marko Mäkilaakso: It started out as an idea which I presented to the producers. I wanted to make a motocross action comedy set in a desert with big spiders and in the ’80s vibe. Yes, I said spiders! (laughs) I was inspired by Eight Legged Freaks and I wanted to call the movie It Came From The because I loved that game as a kid. So from that day on, we went to develop the project. I wrote the first draft of the script, which still had spiders in it. Then our producer contacted Cinemaware, the company who produced the It Came From the Desert video game in the late ’80s, and asked if we could use the title of their game in our movie. To our big surprise, not only did we get to use the title, but they wanted us to make an adaptation of the game.

So we started re-writing the script to accommodate that. The movie is a live action sequel to the It Came From the Desert games and set in modern times. The movie has an independent story with new characters, but we do live in the same universe as the games and the fans will recognize that.

We shot the movie in Spain and Finland. Every location worked perfectly for our needs. I still get goosebumps just thinking about them. Simply amazing! The mornings were always very cold in the Almeria desert and the days got crazy hot, so the contrast was big. I loved being on the set super early with my assistant director and watch the clear, dark sky in silence. It was always so beautiful and peaceful… And cold as hell! But it always helped me to set my mind for the day’s task, and as the and crew arrived, I was ready to rock! We also had lots of stunts in the movie and very difficult, dangerous stuff, but luckily no accidents happened. It all went smoothly. The actors were great and understood the campy, fun tone of the movie.

It Came From the Desert is a blend of PG scary movies of the ’80s as well as horror sci-fi films of the ’50s. It’s a tribute to Roger Corman drive-in films and Spielberg, Dante and the Cannon Films’ style of ’80s adventure, comedy, action flicks. Just pure 100% fun entertainment!

PopHorror: Do you have any projects coming up that you can talk about?

Marko Mäkilaakso: many projects in various stages at the moment but I think it’s too early to talk about them. Anything can still happen! But I just can’t wait to shoot a movie again! (laughs)

Marko Mäkilaakso: My favorite horror movie is Jaws. Brilliant film! I can’t go to the water and not think about sharks because of that movie, but then again, I’m not the only one. I also love old James Whale horror films, as well as Hammer classics. Amazing stuff! Creature features have always been close to my heart. I love Joe Dante’s films, John Landis and John Carpenter’s movies.

PopHorror: Jaws is my favorite horror movie, too! And I agree, creature features are the best. Tell me about the time you watched your first horror movie.

Marko Mäkilaakso: There’s two different movies and memories regarding that, but I don’t remember which one was first. I think the first horror movie was the old Universal Frankenstein film which I watched late night when my uncle was babysitting me and my older brother. I was most likely five or six. I was so scared – but in a good way! I was feeling excited and it was fun, not like going to bed and having nightmares. Twin Peaks did that for me later.

And the second memory is watching John Carpenter’s Halloween at my mom’s sister’s place at the same age. That movie scared the living crap out of me! I was not allowed to watch horror movies at home, but elsewhere I was free to experience the scary movies and read Stephen King’s books and I was hungry for all that. I was totally excited watching all kinds of horror films, but remember IT, Cujo, Alligator, Dead Zone, The Shining, Piranha, and An American Werewolf in London. It was of being scared. It was positive. I didn’t have nightmares but my imagination went wild and I created stories in my head. Actually, The Brothers Grimm tales were a different story. I was scared to walk in the forest after hearing those stories! Really scary stuff and those are for kids! (laughs)

PopHorror: (laughs) You’re not even kidding! If you could work with anyone in the industry, alive or dead, who would it be and why?

Marko Mäkilaakso: Steven Spielberg, Joe Dante, Robert Zemeckis, Charlie Chaplin, and Roger Corman… the list goes on and on. Why? These filmmakers inspired me in so many ways and it would be an honor to work with them and relive the wonderful memories from the past and create new ones with them.

PopHorror: What are you afraid of?

Marko Mäkilaakso: I’m afraid that I can’t make movies anymore. That is my biggest fear.

PopHorror: Thanks so much for talking with us, Marko!

Keep checking back with for the upcoming review of It Came From the Desert!