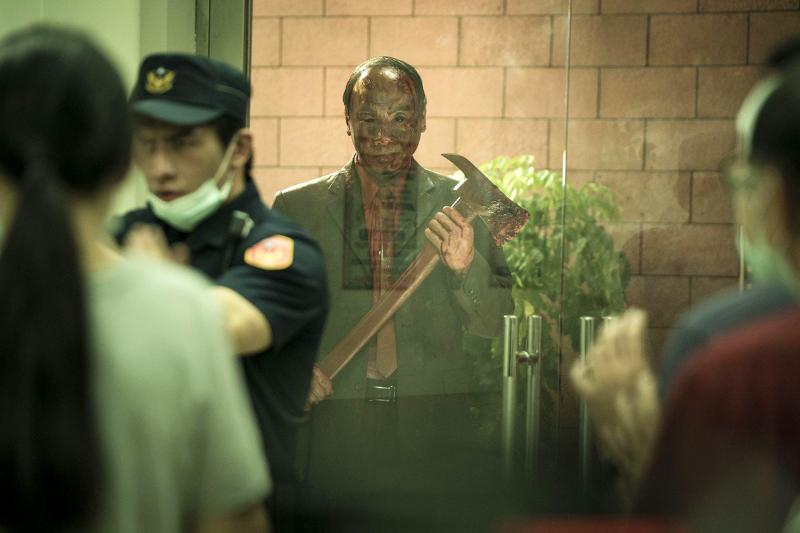 The Sadness Review: One Of The Most Horrifying Movies Of Any Year [Telluride Horror Show 2021]

Stop me if you've heard this one before: A rogue virus temporarily halts a speedy nation. A pompous president politicizes a deadly pandemic. Science and facts are ridiculed in favor of returning to some sense of normality before the experts deem it safe. Everyday citizens categorize the crescending mutation as nothing more than a hoax. Said citizens become quickly afflicted by the supposed 'hoax' and suddenly aren't feeling so hot. Riots break out. Bodies pile up. Illness sweeps the streets. Death comes to town. First-time director Rob Jabbaz sets his sights on mainlining familiarity in "The Sadness," and the result is every trigger warning on the planet.

Centered around Jim (Berant Zhu) and his girlfriend Kat (Regina Lei), "The Sadness" follows the picturesque lovers on their journey through the day delivered straight from Hell. What started out as a normal morning between a typical monogamous couple arguing over when might be the best time to take off work for a romantic getaway quickly devolves into a fight for survival amidst a sun-stained massacre, as a lethal virus rapidly spreads through the quiet corners of this claustrophobic concrete jungle.

Jim, having dropped his girlfriend off for work right before chaos exploded onto the scene, makes it his mission to find Kat again and rescue her from the madness set loose upon the city. But is a happy ending warranted when the depravity of mankind is so unabashedly de-masked? Do we, as a people, deserve solace when all we do is selfishly set ourselves as the stars of the story in the guise of righteous condemnation?

Born in Canada, but a longtime resident of Taiwan, director Jabbaz originally sought to make his spin on an outbreak movie as realistic as possible in depicting the aesthetic and ritualistic movements of the Taiwainese government. However, when he and his crew set out to make their zombie adjacent flick at the beginning of the Covid-19 outbreak, and he saw how well his government was already handling everything, he veered a little more into caricatures loosely based on the leaders in charge.

Still, Jabbaz had his finger on the zeitgeist, as "The Sadness" unintentionally parallels many real-world tragedies that citizens of the world experienced in the age of the coronavirus pandemic -– in particular, residents of the United States. Like an even more nightmarish version of what Americans underwent in the past few years, the movie shows a mutated virus spreading like wildfire while the government sits on its hands, and the symptoms range from swelling of the throat and face, to committing violence against yourself and others. The virus affects the limbic system, the part of the brain involved in behavioral responses, making those who catch it act out their sickest fantasies on those around them. Like sentient zombies, the infected can drive cars, use weapons, and even speak in their normal voices. Murder, rape, torture, and general hysteria are what signify the afflicted.

A deeply disturbing cautionary tale, "The Sadness" acts as a warning sign to those who don't take science seriously, while simultaneously commenting on the culmination of the woes of everyday life escalating in a fist that punches a hole through the world.

Despite the fact that Jabbaz brings extreme terror with a surprisingly insightful topical twist, "The Sadness" is truly at its best when it's embracing its gory nature and going haywire with geysers of thick, syrupy blood. Wisely foregoing the path more traveled by most filmmakers who prefer using digital effects, this blood-spattered beauty opts for mainly practical, resulting in some truly grimacing and over-the-top gratuity that plays sensationally on a big screen surrounded by giddy gorehounds.

The gags are downright delightful. Less of an homage to classic B-movies like "Dead Alive" and "Bad Taste" and more in the spirit of their vibe, Jabbaz walks a delicate tightrope between nostalgia and imitation, making something special in the process that would make icons like Stuart Gordon and early Peter Jackson proud. The more mean-spirited moments of sadomasochism don't sit quite as well as the fantastical bits, but it's nice to see such commitment to authenticity in a time when everyone just defaults to fixing it in post.

The movie is short and straightforward, but calling it minimalist would be a misnomer. It's more like the exhalation of a scream after a lifetime of holding your breath. Jabbaz's images shake and blur, the frames pulse with tension, the energy coming off the screen in waves. Brutal maximalism by way of collective anxiety. The film shows you the worst behaviors imaginable and dares you to keep watching.

The personification of the id Trojan horse-d into a zombie movie. A masterclass on the bystander effect in real time. A case for shifting the momentum of the studio system back in the direction of practical effects. It's easy to see why "The Sadness" stands out amongst many other pandemic-era contenders. Jabbaz shoots confidently and with ruthless abandon, throwing every ounce of malice at the screen and seeing what sticks. It might be a little too heavy for the casual moviegoer, and that would be perfectly understandable. It's entirely intimate and at the same time, an utterly otherworldly series of events. It's all of our fears rolled into one. "The Sadness" is one of the most disturbing movies I've seen in quite some time.