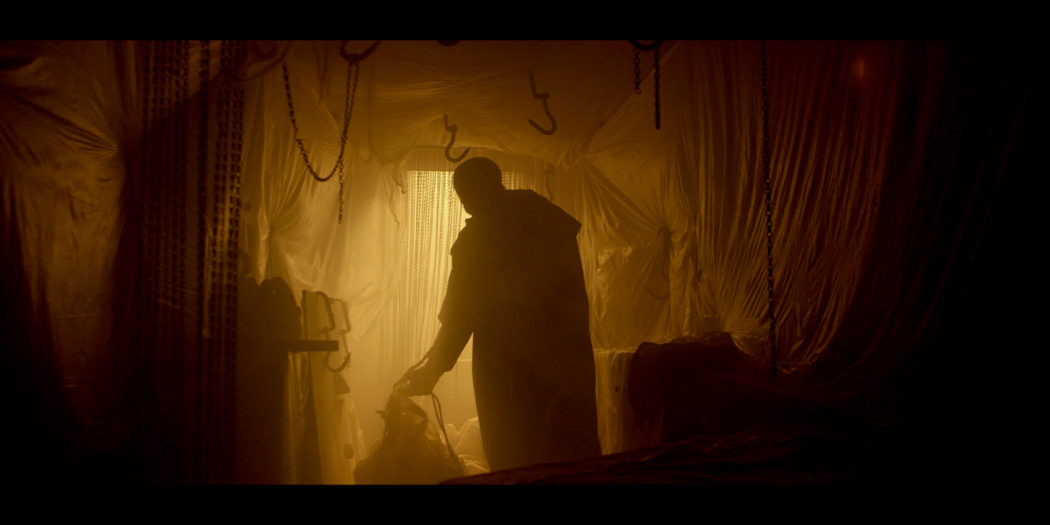 Throwback Monster Film, ‘The Barge People’ (2018), Is Closer Than Ever to Release

got in contact with U.K. director Charlie Steeds (Escape From Cannibal Farm 2018) concerning his new horror opus, The Barge People. We watched the trailer and were instantly floored by the amount of throwback ’80s monster carnage. Reminiscent of such films such as Humanoids From The Deep, The Barge People promises to be a hellish, terrifying and gory trip down a canal in the English countryside. Steeds kind enough to provide us with a bunch of information which shows his absolute enthusiasm for the picture and, in turn, has made us rather excited in the process!

Charlie had this to say about The Barge People:

I’m Charlie Steeds, director and producer of upcoming British indie horror movie The Barge People. Our official trailer was released online last month and has since had a wonderful reaction across the online horror community. I’ve had a wave of excited industry folk getting in touch, from supportive and encouraging horror fans to huge Hollywood companies. Safe to say the whole The Barge People team has been thrilled with the reaction and can’t wait for everyone to see our movie after it completes post-production later this year! I have this terrible habit of releasing the trailers for my movies unusually early, so we’re a way off from announcing official release dates yet, but it has to be that way as we’re totally independent and our release is entirely dependent on the buzz the trailer creates.

The Barge People is my third horror feature film, after Escape From Cannibal Farm (out on DVD/VOD now in the US/Canada and on DVD in the UK from April 23rd) and The House Of Violent Desire (out later this year). Its a blood-drenched throwback to old-school, 70s to early 80s horror (the golden age of horror, let’s be honest) in which two sisters reunite for a little canal holiday weekend getaway with their boyfriends, and soon sail into the sinister territory of flesh-hungry fish mutants known only as The Barge People. You know what happens next… Blood, guts, machetes, meat cleavers, severed limbs, all the good stuff!

I’ll start by explaining that renting a boat and sailing down the canal through the English countryside (at an even slower pace than you could walk) is indeed something people do here in the UK. I recall going on a canal trip for the weekend myself when I was growing up, so yes, its a thing here! Along comes writer Christopher Lombard and this script that takes the usually pleasant canal trip tradition and totally turns it into this thing of terror and bloodshed, and I instantly thought it was the perfect next project for my independent production company, Dark Temple Motion Pictures, with its emphasis on what I call New Retro Horror filmmaking. I also loved that this horror concept felt so specific to Britain, and this canal setting is something I’ve not seen done in horror before. felt unique, and I felt inspired to make this horror movie!

The script first came to me via my lead actress on Escape From Cannibal Farm, Kate Davies-Speak. We were shooting Cannibal Farmon location near canals (in fact, very close to where we ended up shooting lots of The Barge People exactly 16 months later), and Kate remembered this script she’d read, The Barge People, and told me I should read it, and that it’d be right up my street. So skip forward to only a few months later, and I’d read the script, met with Chris for the first time, and we were both on exactly the same page from day one. Both The Barge People and Escape From Cannibal Farm are inspired by backwoods slasher movies, both me and Chris are lovers Hills Have Eyes (the remake, c it’s a bloody savage film!) Texas Chain Saw Massacre (certainly NOT the remake, utter shit…), and so we spent the next year working the script into a final shooting draft that I could produce on a low, indie budget.

It was during this time that we changed The Barge from the feral humans as originally written (like The Hills Have Eyes’ mutant family) into fish mutants, which is part of what really thrilled me about making the movie. I wanted these things to be utterly monstrous! And who doesn’t love a ?

It was a short but exhaustive shoot in cold and miserable October 2017 that saw the tiny production team venturing from to caves, to long night shoots in pubs and muddy woodlands, onto our specifically built barge set.

Central to this script was an ultra-violent attack within the character’s barge, where The Barge People mutants themselves are first revealed, and this was a really important action scene where I could let loose as a horror filmmaker. So my frequent cinematographer, Michael Lloyd, and I built the interior of the barge as a set, ready to be completely destroyed and drenched in slime and blood, with breakaway walls, so we could get as messy and as savage as we wanted!

Shooting on a canal with the camera strapped to a moving boat also presented endless challenges. some bits of camera/lighting kit lost at the bottom of that canal if anyone wants to go looking… It was truly a shoot, I have to admit! Shooting The Barge People rising up out of the murky canal water, like something from Creature From The Black Lagoon, literally consisted of our actor, Sam Lane, zipping up in a wetsuit at and climbing into an icy cold canal with a hefty silicone mask over his head. All in the spirit of good old fashioned horror movie making! And we’re hoping that’s what the viewers will get out of this movie when it’s released in late 2018/early 2019… a fun, gory blast of horror entertainment, best accompanied by beer, pizza popcorn.

As you can tell, The Barge People is generating plenty of interest and excitement, and it promises to be a good time horror film to look for when released. Watch the trailer below, and let us know what you think. Are you excited for the brutal onslaught of The Barge People?