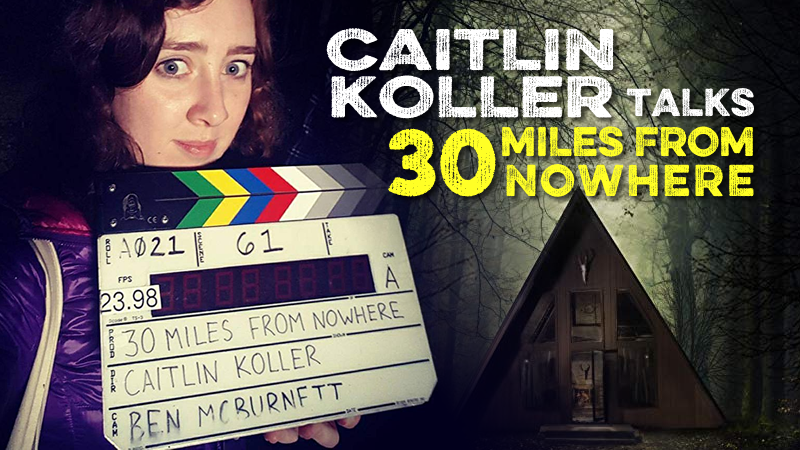 Melbourne-based horror filmmaker Caitlin Koller has had a hell of a year in 2018, to Chicago to direct the cabin in the woods chiller 30 MILES FROM NOWHERE. Koller first rose to attention based on her comedy-horror short BLOOD SISTERS, which garnered buzz for the way it balanced its tongue-in-cheek quirkiness with copious amounts of bloodshed.

A similar vein of black-humour runs through Koller’s debut feature though less outwardly funny, 30 MILES FROM NOWHERE takes a more pitch-black approach. Viewers who think they know what to expect from the ‘college friends in a cabin in the woods’ setting are in for some genuine surprises, as while the film is clearly well-versed in horror tropes, it is never satisfied with taking the easy or predictable path.

In the lead-up to 30 MILES FROM NOWHERE’s World Premiere at MONSTER FEST VII: THE HOMECOMING, Cult of Monster’s David Churack sat down with Koller to discuss how she went about creating her unpredictable genre feature, how Kickstarter was integral to her filmmaking journey and her thoughts on female genre filmmakers!

How did you go about making the leap from Melbourne-based shorts filmmaker to directing this impressive American horror feature with recognizable actors?I became attached to the project through Elizabeth Schuch, whose beautiful and inspiring debut feature THE BOOK OF BIRDIE had its Australian premiere at the ‘Stranger With My Face International Film Festival’ in early 2017 – where my short film BLOOD SISTERS was having its world premiere. We met in the festival’s ‘Attic Lab’ master-classes run for women filmmakers who specialize in horror.

While Elizabeth was offered the role of director by Film Camp Productions, she was already committed to another feature. After reading the script she informed producers that the dialogue and character interplay reminded her of my film and contacted me about the recommendation. When Film Camp Productions offered me the job, I was so excited to be able to bring my horror-comedy sensibilities to a horror-thriller. It was a challenge that I knew I would face head-on.

So much of the film relies on the relationship and dynamic between your characters. How did you ensure you found the right actors for the project?It’s always difficult to know how actors are going to work together, especially in such a large ensemble cast as we had. Kelly, Seana and I made it our goal to make sure that the actors we wanted to work with were not only game to come to run around in the woods of Illinois for around 3 weeks but also had a good reputation for ensemble acting. All of the cast were equally willing and enthusiastic after reading the script. They were also so excited and supportive of my vision for the film: overall it really was a collaborative effort.

Spending most of the shoot in the woods of Illinois meant we were all living out there together, so coming to set was like film camp. The cast and crew became close despite the tight schedule and there was shared passion for the project that got everyone out of bed in the morning to make something that they were excited about. I think that bond, the closeness, is evident on screen both in the connections between the actors and through the efforts of the crew in how we managed to shoot everything to such a despite the tight turnaround. Having an ensemble cast also meant that the cast open to experimentation and, when we had the time, some improvisation. Spending nights getting through tornadoes of mosquitoes and acorn torpedoes was a bonding experience like no other!The film has its fair share of violence, but it also puts a lot of effort into and slow-burn creepiness. How did you decide on this approach?Seana’s script lends itself to creepiness. The audience follows the characters as they navigate the A-frame house, surrounding woods and each other. I love that the house itself is a character that you can either love or hate, with its old-school cabin feeling. The main characters themselves are an anomaly, as you’re used to seeing teenagers navigate terrors in a cabin in the woods, so it’s refreshing to explore these long ago forged friendships and how life has torn and twisted what used to be hopeful and naive young people into adults who may be just as inept as their younger selves in dealing with the dangers and terrors in the house.

The most interesting horror films communicate observations about humanity and how we interact with one another whether or not there are supernatural (or other) problems to overcome. 30 MILES gives an insight into how friendships can be tested under extreme pressure, whether it’s from inside or outside forces, and encourages the audience to speculate about how they would react in the same position. The characterization and slow-burn creepiness were key ingredients exploring these themes.

The cabin that forms the main setting of the film is beautiful! How did you discover it?

Producers Seana and Kelly were looking for an A-frame cabin in the woods of and luckily found one on Air BnB. The owners were such generous people to let us shoot there, so if you like the look of it, you can stay there yourself!

Something refreshing about 30 MILES FROM NOWHERE is that it doesn’t quite follow the usual ‘slasher’ approach of punishing characters for their selfishness or sexual activity. What prompted this approach?

Seana wrote a script that plays with audiences pre-conceived notions of how a cabin in the woods style film is supposed to play out and twists them to give a new take on a well-known sub-genre of horror. It was this subversion of tropes that originally attracted me to the script. Punishing characters for their selfishness or sexual activity is a well-known trope, so this as an arbitrary measure of whether a character survives a horror film or not seems pointless.

It’s 2018, there are new allegories to play with and new measures to judge whether a character can stand on the moral high-ground. Also, just because they do is no reason to ensure they survive or suffer a tragic death. Continually subverting audience expectations is what the best horror-thrillers offer.

The film uses a classic horror set-up of ‘cabin-in-the-woods thriller’ but also takes trappings from more dramatic films like THE BIG CHILL (referenced in the film). What were your main influences?

In terms of story connections, THE BIG CHILL is an obvious parallel. A group of old college buddies who get together for a friend’s funeral – here with a horror-thriller take. Most of my inspirations for the look/feel of 30 MILES were horror or horror comedy films such as; TUCKER AND DALE VS EVIL, THE LOVED ONES, THE EVIL DEAD, APRIL FOOL’S DAY, THE INVITATION and POLTERGEIST. It doesn’t have an overly stylized look, and yet it is its own little world. Ben McBurnett (cinematographer) and I had many conversations before shooting about the kind of look we wanted and were able to cement it with the help of Bradley our amazing in post-production.

Although not a horror-comedy, 30 MILES FROM NOWHERE has a unique streak of black comedy running through it from the writing, something the cast really picked up and ran with. There aren’t many horror-thriller films with a cast as accomplished as we had with this film, or even with an ensemble cast. James DeMonaco’s THE PURGE: ANARCHY is a film that uses an ensemble cast in a horror-thriller setting and makes the most of it. We tried to emulate that in the way in which we empathized with each character and spent time with them during hurdles they had to overcome.The producers were on board with my desire to keep the outdoor scenes feeling agoraphobic and then indoor scenes feeling claustrophobic with the look and choice of shots. The protagonists are not safe in or out of the A-frame house, which becomes a character itself. The obvious parallels here are Kubrick’s Overlook Hotel in THE SHINING, or Raimi’s cabin in the woods in the EVIL DEAD franchise, which were themselves characters as much as they were a part of the horror overcoming the characters.

Without giving too much away: there’s a big focus here on character psychology and the darker parts of the human psyche. What interested you about these themes?

Although I’m a sucker for a good monster movie, I always find people to be the scariest villains. There can be a slightly supernatural air to them, but I always found myself drawn to slashers and psychological thrillers for that reason. The horror-thrillers that usually interest me most concern themselves with the underlying psychological motivation of both the protagonist and antagonist. I’m drawn to the human connection I have with the characters and I want to be compelled to follow them on their journey as they battle internal and external demons to survive the situation they find themselves in.

copious amounts of blood, cockroaches mice in this film. Does this represent what you yourself fear?

There are copious amounts of blood, cockroaches mice, but that’s not really what scares me. While everyone has particular fears and phobias, mine nothing unusual.  30 MILES follows a group of friends who are each faced with their greatest fears and must find ways to overcome them. Since they are all different, the scares are tailored to suit their characters and so even while our audience members will each have different fears, there is a good chance they will find something in 30 MILES to get their adrenaline pumping.

Can you talk about the experience of crowdfunding the and what connection that gave you to your audience?

Using Kickstarter gave Seana, Kelly and I a means to directly address our audience and engage them in the filmmaking process just the final product, along with a whole host of awesome perks attached for supporting the project. Films like 30 MILES are only possible because of our investors and Kickstarter backers, without their help, indie filmmaking just wouldn’t be possible – or would be extremely rare.

What’s your perspective on the recent controversy over a (supposed) lack of female horror directors?There are many talented identifying directors working. The problem usually lies with them not being given the same opportunities as their male-identifying counterparts. Producers, production companies and the film industry at large need to address the gender imbalance. Film school graduates aren’t majority male, so we need to identify what is happening between film school and the next steps of gaining opportunities and finding work in the film industry.

30 MILES FROM NOWHERE will have its SOLD OUT World Premiere at MONSTER FEST VII: THE HOMECOMING with a Q&A by director Caitlin Koller on Saturday, 24th November at