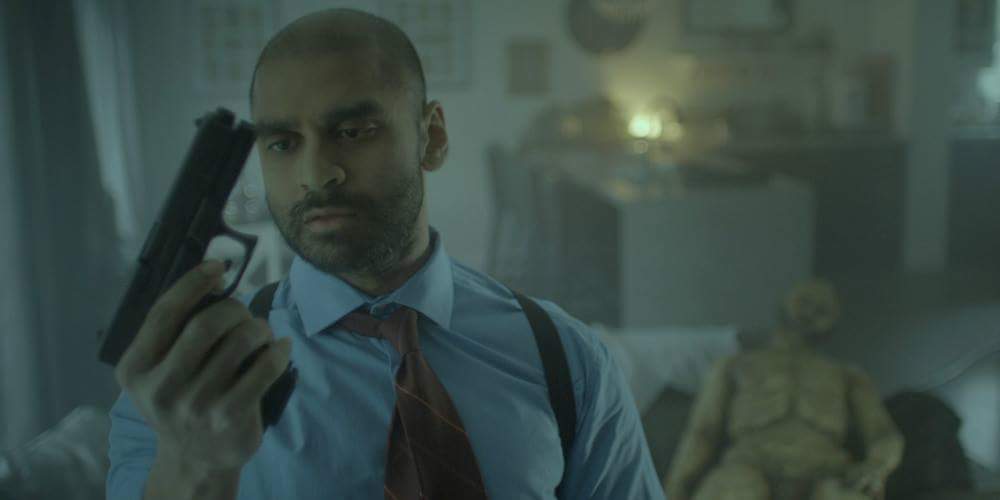 Scorching the Retinas; Storm of Indy

To cut a diatribe short (please) this is how Lifechanger starts. scene for sure, but add in a ‘’ subconscious narrative from genre icon Bill Oberst Jnr. and things start to make sense, falling into place almost immediately.
Drew, portrayed by a variety of very competent folk, is a shapeshifter, not to be confused for a hirsute fellow who howls at a blinding orb in the sky, runs on all fours and poops in the woods. He’s a shapeshifter and it’s unfortunate. It’s not a choice he’s made, not an elective he’s signed up for or even a career he’s enlisted in. It’s a curse.

As time has gone by Drew has learned to adapt and roll with the punches. Tragically though in order to someone must perish.  …”There comes a point where survival is just another job” To quote the narrative.
As if that’s not bad enough, Drew takes on the form, and appearance of has perished at his hands. And this is where many, myself included, might find this feature similar to that of Quantum Leap (if you haven’t heard of it I’ll wait while you the term and  proceed to plummet down a rabbit hole as seasons of the show flicker before your eyeballs and you lose all track of time and reality. Did I mention it’s addictive
Imagine waking up in someone else’s shoes and having to act as if nothing has changed,  is wrong, never mind the fact that your ‘body’ is in a plastic bin bag someplace (possibly floating lazily downstream with fishes nibbling at its toes, or drifting toward the heavens in a million tiny particles) and your essence, thoughts, dreams fears are jumbled mired by numerous others, all experienced for an all too brief period of time.
It’s all a matter of survival. But, it gets repetitive, it’s necessary but most of all it’s lonely. As Bill Oberst Jnr. (The inner monologue of Drew) likes to point out. But fear not for Drew has found a spark, something to give his existence meaning. Lifechanger showcases, among many things, most of which aren’t quite so uplifting, his journey in this regard. With that in mind one could say that this isn’t a typical horror movie, but rather a love story of sorts interwoven with elements found in a myriad of celluloid, Invasion of the Body Snatchers (in all of its many guises and remakes), Quantum Leap come to mind, Tobe Hooper’s Lifeforce might pop up if only for the dried human husks but undeniably for that sublime bottom featured throughout (how could one forget?) Then there’s the obvious – Skinwalkers. A term tied closely in with the ancient mythos of shapeshifting itself originating many moons ago (see what I did there?)

Drew’s voyage isn’t one of sipping mai tais, applying SPF 6 and sailing calm waters. Naturally, things get a little sticky when homicide is involved, the authorities often stumble their way across screen not to mention that it’s not easy to interact with a love interest, a person whom he felt he really connected to more so than anyone else, when your form drastically and dramatically changes from week to week. In one instance, in one of his many “guises” Drew answers the question: do you consider yourself a good person? To give the viewer an idea of how frustrating, confusing and taxing it must be for him. He replies (in the narrative) “…I’m not even sure if I consider myself a person at all.”
To top things off his transitions are traipsing into bothersome territories. His ‘reincarnations’ aren’t serving him as well as they used to. Fearing something is amiss, Drew suspects time might be running out. What is he to do and how does he approach attempting to do just that? And what will happen if he doesn’t?
So many questions and only so many forms to take before suspicions are aroused.

Lifechanger shines with brilliant writing, a delicate tale that tackles numerous subjects, and a variety of themes (some of which more obvious than others), but it somehow manages never to bore. It imparts observations on human behaviors and habits though doesn’t come as close to a report. Shot through with reflections and humor it rather makes the viewer ponder upon quirks, foibles impulses. It might also make them ponder on a subject which has vexed many for time eternal. What lengths would you go to survive? What would you sacrifice for what you perceive to be

Stunning performances, portrayals interactions within Lifechanger the audience ponder upon a life in the same situation, the choices they’d have to make and the gruesome deeds they’d have to partake in and suffer through.

Lifechanger’s pace is perfect and its narrative (brilliantly told by Bill Oberst Jnr. have I said his name already?) adds sufficient weight to the story. A fantastic addition is the fact that the narrative leaves the audience intrigued, who or what is Drew, how did he end up like this? Details are given at just the right instant with a final reveal coming around the time Drew decides to do just the same. Complementing the onscreen action it adds another layer to the films allure, a clever trick which skyrockets this feature into memorable genre territories.

The effects shown throughout are applaudable, though never overpowering, practical and classy. The overall effect is one that focuses more on the brutality of what needs to be done rather than showcasing the bloodthirsty nature of one who adores such duties. Scenes include the transition of one firm to another and several bludgeonings. Whilst on topic there’s also an attempted rape scene I believe will leave people cheering on account of it’s empowering properties. I’ve done my best not to spoil the movie so I’ll keep this scenes description brief.
What’s left to mention? Honestly, I could go on until my digits wear down into knubs this is how much I found myself liking this film. Silly me, I forgot to mention the score and films soundtrack. The score effectively adds tension but is never overpowering while the soundtrack is fueled by rock tracks, not the obnoxious kind that on the radio, which only makes me like it all the more.
To add the proverbial cherry the end credits features a track that has instantly secured a dominant place on my seasonal playlist (Did I fail to mention Lifechanger takes place around the season? I guess that makes this a Christmas movie, so you can add it to the list) “You don’t Deserve a Goddammit Thing for Christmas” by Polkadot Cadaver rolls with a gentle acoustic pace but it’s the lyrics carve a smirk on the chops.

In conclusion, make time for Lifechanger. It’s an amazing slice of celluloid that warrants attention, boding especially well for the future of its director and writer, Justin McConnell, a talented chap indeed.
Seek this out, it’s a ‘gamechanger’, a movie that will be talked about.