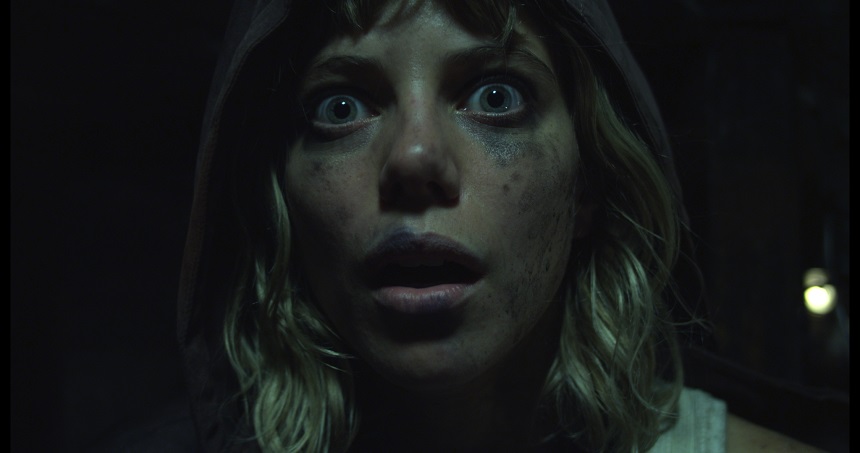 When Elena was a young girl her parents were brutally murdered during the night and she was kidnapped, separated from her brother Facundo. Twenty-five years later, Facundo is a doctor and lives with his beautiful wife Valeria and their two daughters. Then Elena appears in the forest, injured and sick with a virus in her blood. Facundo is elated, Valeria is cautious. Facundo is eager to include Elena into his family but whatever took her twenty-five years ago wants her back. And it is coming for her.

In Jimena Monteoliva's dark fairy tale, Matar al Dragon, there are a number of allegorical interpretations going on here at the same time. Monteoliva intended for Matar al Dragon to be seen as commentary of the brutal reality of young girls disappearing in Latin American countries, an allegory that director Jimena Monteoliva curated from Diego Fleischer's screenplay based on a nightmare he had. Around that there can also be gleamed from the tale families struggling with members who are dealing with or recovering from addiction and class politic allegories. In the subtlety of Monteoliva's dark fairy tale it speaks to many on different levels.

For this review we will stick with the allegories of class politics and addiction, for my sake, because I live somewhere where parents do not have to be terrified about their daughters getting kidnapped at any given moment. I cannot imagine that very real fear and having it dictate my response to Monteoliva's film.

Cecilia Cartasegna as Valeria, with her classical beauty, serves as the embodiment of rank and privilege, of indifference. The only concern that she has is that the virus that plagued Elena will get into the house. She implores to Facundo that he take this sickness out of their home. When Tarugo leaves the underworld to look for Elena, he meets Valeria at the gate of her home (standing in for gated communities around the World that keep the bad people out) and touches her hand. After the altercation she immediately goes to the washroom and furiously scrubs her hands. She will protect her family and her home inasmuch as carrying a rifle around the home because of that altercation. Why do they even have a rifle in the home? To keep the bad people out.

Likewise, Justina Bustos as Elena, presents a look of innocence yet to be recovered. Fitting, seeing that she was stolen from her brother at an early age and ultimately represents that desire to return to a normal life, one free of addiction. Once cleaned up Bustos' bright blue eyes and hint of impish looks embodies recovery and innocence retained once again.

There is, in a sense, a reversal of gender roles in Monteoliva's film. Women have often been told that they are too emotional or irrational yet here in Matar al Dragon it is the men who are acting impulsively and not making good, clear decisions. Though he may be a doctor, Facundo, disregards all the judgement, reasoning and rules that come with the job. His sole focus is integrating Elena into their home. He goes as far as sneaking her to the hospital to do more blood treatments of her virus. Tarugo, though he may be the bad guy here, is also acting primarily off of his emotions. He was the one who figuratively raised Elena, which begs the question why didn't he let her get processed when he kidnapped her all those years ago? There must have been some feelings for her that kept her at his side all these years, and not let her become a victim of that which they served in the underworld.

And yes, Valeria may be the lioness, protecting her cubs, and that requires levels of emotional commitment but from the start she is always against Facundo bringing Elena home. Which begs the question, is she more concerned about personal safety or how all of this looks to the neighbours?

When the film comes into its own as worlds collide and the stakes are raised, it is Elena who leads the charge into the underworld. It is her who makes the conscious decision to stay clean and take the medication to heal her of the virus. When it comes to displays of emotion none do it better in this film than moments of nuance from Justina Bustos as Elena and the young girl who plays the eldest daughter Ema. Again, the film shows its strength in subtlety, at work here as both actresses have their quiet moments of sadness.

Matar al Dragon also joins the list of films that challenge our expectations when it comes to the inevitable violence that occurs when the two worlds collide. It challenges any desire for violence without putting it on full display. It concerns itself with the impact of the violence, not the act. When it is not being sly with the violence there is also some great symbolic violence from Monteoliva's film too. A knife digging into a birthday cake, cutting through the thick icing, into the dark, chocolate cake clearly signifies the invasive presence of Tarugo.

Even with hiccups along the way, some slightly odd beats in the edit and a moment or two of awkward acting, Matar al Dragon still speaks to its audience on multiple levels. How personally it reaches out to you is between you and the film.

(I first caught Matar al Dragon as a work print around this time last year. In that time the effects have been completed and a proper introduction has been created to cement that Matar al Dragon is a dark fairy tale. Layered with allegory, but still a fairy tale. Any concerns I had back then about Monteoliva's personal message and intent for her film not getting through to the audience were put to rest when questions about the kidnapping of young girls in Latin America came up during the Q&A.) 80% of cast and crew who worked on Matar al Dragon were women!