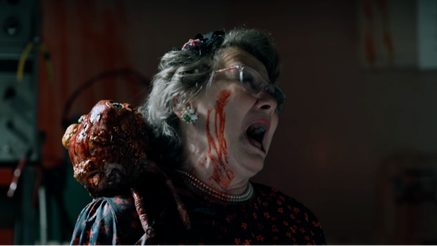 I didn’t have the good fortune of growing up near a town with a drive-in or a ton of friends who shared my interest in horror and science fiction...

...Thanks to shows like MonsterVision and Mystery Science Theater 3000, I was exposed to a wide range of films and my love for genre cinema, especially the most outrageous and schlocky movies, grew at an outrageous rate. Since then, I’ve never passed up a chance to watch any movie even slightly reminiscent of those that dominated the drive-ins I always adored from afar.

There are few films I’ve seen that embody a love for the drive-in monster movies of old more than Cyst, a sci-fi horror film that made its World Premiere at FrightFest this past weekend. Directed by Tyler Russell, and written by Tyler Russell and Andy Silverman, Cyst centers around the office of Dr. Guy (George Hardy), a doctor whose specialty is diagnosing and removing cysts and other serious tissue growths. In hopes of revolutionizing the dermatology game, Dr. Guy has been working on the Get Gone machine, a device he invented that’s intended to increase the ease and efficiency of cyst removal procedures.

Despite his devotion to the project, and much to the chagrin of nurse Patricia (Eva Habermann), who happens to be a previous test subject, the Get Gone machine is neither fully developed nor safe. That doesn’t stop Dr. Guy from trying to patent his design, despite Patricia’s promise to quit if he uses the machine again. When the patent examiners come to give Dr. Guy his last chance at a patent, he is determined to do whatever it takes; instead of getting rid of the target tissue growth, the Get Gone creates a cyst monster which takes off on a rampage through the office.

If the title didn’t give it away, Cyst is a gloriously gross movie. As someone who can’t help but stay glued to the screen in abject horror whenever I come across some weird pimple popping or cyst draining video, Cyst is the movie I didn’t know I needed. Fluids fly and thick liquids leak by the gallon as Dr. Guy works on his patients. More than once, someone takes a spray of cyst juice to the face as the membranous growths are milked until empty. Cyst is a bloody, leaky, pus-filled monster movie that’ll make you shudder in disgust over and over again.

The repellent practical effects lend an air of reality to the more realistic parts of the movie, with the sebaceous cysts and scenes of cyst draining looking all too much like the real thing. Combining realistic effects with an over-the-top script and acting make Cyst a ton of fun for anyone who can stomach it. Add one giant cyst monster, which only further calls upon the monster movies of the classic drive-in era, and you’re guaranteed to have a fun time.

While Cyst benefits from a gross original premise and fantastic practical effects, its flaws are most visible in the story and pacing. The characters feel one-dimensional and lack growth or any successful character arcs. The story also lacks any real depth and boils down to the accidental creation and need to destroy the cyst monster. Some scenes and character choices seem forced and unnecessary and the film doesn’t benefit from them at all. While this only furthers the connection to the pulpy monster movies that Cyst is a descendant of, it’s likely to keep some viewers from fully investing in the story.

Cyst also suffers from a pacing issue. At 69 minutes, I couldn’t be happier with the runtime. It seems like we’ve been getting a taste of horror movies on the shorter side this year, and I love it. But when a feature film is trimmed that short, every minute counts and scenes that seem unnecessary or drawn out longer than needed are much more noticeable. The latter is particularly the case here. Cyst has several action-packed scenes that keep the energy going, but they’re interspersed between slower scenes that drag on longer than they should, especially when I’d much rather have more of the goo-filled goodness to fill my eyeballs with. While these slow downs didn’t significantly hamper my enjoyment of the film, they left me wishing more of those precious minutes were used to splatter the walls even further.

Cyst is a fun-filled homage with practical effects sure to leave even the strongest stomach queasy. While the plot and characters are a bit flat, the film’s outrageous acting and splatstick style makes it an easy choice for any horror lover looking for laughs.